"The Light of the Divine" 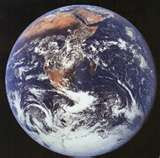 "It was a miracle." (Gene Kranz, NASA Flight Director of the Gemini and Apollo programs that successfully sent men into space, and ultimately, the moon).

I recently watched a documentary of the first decade of American manned space flight. Amazingly, in that short span of time, NASA fulfilled President John F. Kennedy's stated goal in 1961 that the United States should send men to the surface of the moon and return them safely before 1970.

Gene Kranz's affirmation of the miraculous, as stated above, is surely true. While untold time, sweat, determination, intellect, and even blood were the human elements that accomplished NASA's mission, it is impossible to believe that God was not involved in the inspiration, illumination, and energizing of humanity that led to human feet walking on the surface of the moon.

"The true Light, which lighteth every man that cometh into the world... every good gift and every perfect gift is from above, and cometh down from the Father of lights" (John 1:9; James 1:17).

God "giveth to all life and breath and all things" (Acts 17:25). All good and virtuous human accomplishment is first and foremost Divine accomplishment. This does not mean that every person has redeeming and living relationship with Him, of course, but it does means that the doings of man would be impossible without "the true light, which lighteth every man," and the "life and breath and all things" that are the direct gift of the Creator to the creation made in His image. Accordingly, as vital as are the human elements in producing amazing feats and things, the greater truth is that men walking on the moon was first and foremost cause for men to kneel on both earth and moon to render amazed adoration and acknowledgement of God.

This perspective is life-changing, and will grant a view of life and the universe that provides altars for praise and thanksgiving at all times. The laptop computer on which I am typing these words, and the capacity to send them around the world, results from countless people having thought, worked, and successfully produced the miracles of the computer age. The latter point is nevertheless the most cogent - "miracles of the computer age." Computers are gifts of God to humanity, and while they may often be used for other than godly purposes, the fact is that man would have less than a zero possibility of having produced such marvels apart from the wisdom and enabling of our Creator. "Every good gift" must be viewed in the same wondrous light of the Divine, and even now, I bow my heart and head to praise the One most responsible for this gift that makes possible our communication and fellowship with each other.

From the shoes on our feet that enable us to walk the rocky paths of the earth comfortably, to the stunning engineering and technology that enabled Neal Armstrong and others to set foot on the moon, all are first and foremost the products of the mind and heart of God. It was a miracle that NASA accomplished its goal in so brief a time. The truth of the matter is that the world is filled with miracles - "the whole earth is full of His glory" (Isaiah 6:3). Therefore, while we may give a proper nod to the people through whom such glory comes, we give our worship to the One who is the very heart of "every good gift and every perfect gift."